Political Management of an American Icon 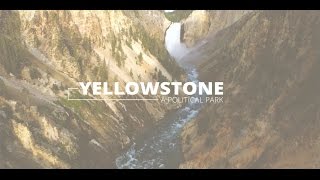 As the National Park Service (NPS) celebrates its centennial anniversary in 2016, the Institute of Political Economy (IPE) at the Utah State University examined how NPS officials have made management decisions in Yellowstone National Park over the past century. In the report Manufacturing Yellowstone: A Political Management of An American Icon, IPE found that drastic changes in NPS management over time can be explained by contradictions in the Organic Act of 1916 and the political incentives of park manager.

The Organic Act of 1916 is the foundational law that dictates how the NPS manages Yellowstone. Under the Organic Act, the NPS is required to conserve the scenery and wildlife within the national parks while also promoting recreation for park visitors. The mandates for conservation and recreation can be contradictory because conservation often comes at the expense of recreation and vice versa. As interpretations of the Organic Act have changed over time, management strategies in Yellowstone have also changed, directly affecting park ecosystems.

The paradoxical mandate to promote conservation and recreation enlarges the NPS’s decision-making power because nearly any management decision falls in one of these two categories. NPS officials, as federal bureaucrats, have wide discretion in managing Yellowstone for two other reasons. First, oversight from Congress and the president is generally limited. Second, NPS officials are not elected, so they do not have to respond to election pressures like politicians.

Although NPS officials have wide discretion to implement nearly any policy they choose, they make policies to please congressional leaders and the public. Park managers respond to political pressures because they are rationally self-interested individuals. Like all people, they strategically make decisions to benefit themselves, maximize their budgets, and promote their preferences.

NPS officials have completely reversed several far reaching policies regarding wildfire and wildlife over the past century to reflect the changing preferences of politicians, bureaucrats, and the general public. When the NPS began managing Yellowstone in the early 1900s, NPS leaders promoted recreation over conservation because the public demanded it. After the environmental movement began in the 1960s, the public demanded more conservation-based management, so Yellowstone managers changed policies to reflect these new preferences.

One of the biggest policy reversals was fire management. The NPS originally suppressed all fires in Yellowstone because tourists did not want to visit a burnt park. After nearly a century of fire suppression, forests became artificially dense and the forest floor became overgrown. Yellowstone’s historic megafire in 1988 was exacerbated because park managers had suppressed all natural and man-made fires for decades. After 1988, the NPS began allowing naturally caused fires to burn for two reasons. First, fires promote ecological health, and second, the NPSwanted to avoid megafires in the future. The NPS still suppresses man-made fires in Yellowstone because these fires are politically unviable, despite the fact that Native Americans set fires in Yellowstone for thousands of years.

Management of several animal species have also made complete policy reversals as political preferences have changed. The NPS once allowed and even encouraged feeding bears in the park, but now feeding bears is a violation of park policy. The NPS actively exterminated wolves from the park when they were considered a threat to livestock, but in the 1990s, the NPS reintroduced wolves to the park. Park managers originally introduced invasive fish species into Yellowstone’s waterways to promote recreational fishing, but now the NPS is working to eliminate invasive fish species.

Beginning in the early 1900s, the NPS actively managed elk populations by killing and relocating excess elk. These management strategies were meant to prevent populations from growing too large and overgrazing Yellowstone’s ecosystems. In the 1960s, many Americans became outraged when mass media coverage showed park managers killing animals in the park. A political firestorm ensued, and congressional committees pressured the NPS to alter their elk management techniques. NPS officials yielded to the political pressure and ceased all active management of elk. Artificially large elk populations have now overgrazed many of Yellowstone’s rangelands and river ecosystems.

Some people may assert that changes in park management have occurred because park managers understand ecology better now than they did in the past. The scientific field of ecology can explain the complex interactions between organisms and their environment, but ecology cannot tell us what the “best” ecological state is. Ecological outcomes can be widely considered better or worse than others, but each outcome depends on personal preferences. Choosing ecological outcomes is a political decision, not a scientific one.

Because park managers respond to political incentives and do not have perfect knowledge, negative consequences arise from even the most well-intentioned policies. Yellowstone’s current management policies are designed exactly for the outcomes they achieve. Achieving different outcomes in Yellowstone will require a political push from Congress and the public. As the public’s preferences change, we can expect that management strategies in Yellowstone will also change.

Beginning in the early 1900s, the NPS actively managed elk populations by killing and relocating excess elk. These management strategies were meant to prevent populations from growing too large and overgrazing Yellowstone’s ecosystems. In the 1960s, many Americans became outraged when mass media coverage showed park managers killing animals in the park. A political firestorm ensued, and congressional committees pressured the NPS to alter elk management techniques. NPS officials yielded to the political pressure and adopted the hands-off policy of natural regulation. Natural regulation advocates suggested, but never proved, that animal populations would limit themselves naturally without human intervention.

Natural regulation ignores the historical role that humans played in shaping Yellowstone’s ecosystem for more than 11,000 years. Because Native Americans hunted animals and burned forests for their own benefit, forests were much less dense and animal populations were much smaller than they are today.

After the NPS stopped managing animal populations in the 1960s, elk and bison numbers increased dramatically. These herds grew rapidly because the NPS actively exterminated predators like wolves and mountain lions from the park.

With artificially large numbers, elk and bison have overgrazed rangelands and turned to aspens and willows to survive. The decline of aspens and willows has had cascading effects throughout Yellowstone’s ecosystem. Beavers were once plentiful in Yellowstone, but are now rare in the park because willows are necessary for their dams. With fewer beaver dams, river ecosystems are drying up, harming the flora and fauna that depend on them. More direct, strategic management could reduce overgrazing in Yellowstone, allowing the river ecosystems to more closely reflect their historical state.

The NPS claims that active management is not needed because the reintroduction of wolves will limit the populations of elk and bison and naturally restore Yellowstone’s ecosystems. Photo 1 shows an official NPS sign in Lamar Valley that illustrates how wolves have supposedly restored the Lamar River’s ecology. Photo 2 shows the Lamar River, which has minimal signs of willow or aspen regrowth. The NPS sign portrays how hands-off management was intended to work, but the actual outcome is much different than the theory would suggest. Wolves have not sufficiently reduced the numbers of grazers in the park because humans, not wolves, served as the top predator in Yellowstone for millennia.

The NPS built exclosures to study the effects of grazers in the park. Photo 3 shows an exclosure in the park near Junction Butte, which was built in 1962. On the right half of the photo, a fence protects an aspen grove from animal grazing. The left half of the photo shows unprotected rangeland. Aspens reproduce asexually by extending offshoots underground, but these aspens have been unable to reproduce outside of the exclosure because grazers eat them before they can reach maturity. These exclosures give strong evidence that overgrazing is harming Yellowstone’s aspen ecosystems.

Although the NPS generally follows natural regulation, the agency contradicts this management philosophy when it is politically expedient. Many of the bison in Yellowstone are infected with brucellosis, a disease that causes miscarriages in livestock. The state governments of Montana and Wyoming strongly oppose infected bison in their states. The NPS works with these state governments through the Interagency Bison Management Plan, which allows them to actively limit bison populations, contrary to natural regulation.